In Memory of James Roger Bennett

It is with heavy hearts that we announce the passing of James Roger Bennett on Saturday, June 18th, 2022. Roger passed away peacefully at the age of 75 with his loved ones by his side. He leaves behind his loyal wife of 51 years, Judith, his 2 adoring children, Andrew (Natalie) and Gillian (Steve), and his grandchildren Olivia, Noah and Angel. Born in England to the late Peter and Mildred Bennett, Roger is also survived by his brothers Grahame (Lynn) and Charles Bennett.

Roger had a fulfilling career in the Federal Government, implementing and supporting IT security in the early days of the technology boom. In 2006, he retired and spent winters in Florida where he continued to apply his leadership skills by becoming president of the homeowner’s association in his community, as well volunteering at, and becoming, president of the Estero Historical Society.

His summers were spent travelling between his home in Rockland, Ontario and “the cottage” in the Laurentians, Quebec.  The cottage has always been the weekend gathering destination for his beloved family, which helped ensure that close family bonds remained strong—he cherished his family. He greatly valued his friends as well, and was always willing to lend a hand and give generously to those he cared for. For many years, as president of the cottage Homeowner’s Association, he helped to organize an annual Corn Roast, which gathered dozens of locals and neighbours. He always loved a good party, but his favourite kind of fun was any leisure activity that would allow him to enjoy his “toys” like boats, fancy cars (most of them, at least!), RVs, trailers and ATV. He enjoyed his life to the fullest and with no regrets.

A Celebration of Life event will be held in late August to honour and celebrate Roger. In lieu of flowers, memorial donations may be made to the Ottawa Heart Institute, or a charitable organization of your choice.

Beautiful tribute to a wonderful Uncle. He will be missed❤

Claire and I are sorry to hear about your Dad’s passing away. He will certainly leave a big void in your family and will sorely be missed. Cherish his memories and the moments spent together. You are in our thoughts; please accept our condolences .

Our hearts are broken we will miss him so much,words can’t be found for our sorrows for all of you,everyone who loved him,never ever will he be forgotten.we will always remember the fun we had together.

I met “Mr. B” as I called him when I was 10 years old, as one of Gillian’s childhood friends. He had a towering stature, which was intimidating at first, but I soon learned he was a gentle giant. He was kind, generous, and loved creating excitement, fun and joy for us kids—riding on (and helping us fly off) the biscuit behind his speedboat, squealing from the rollercoaster rides at the back of his van going to the cottage, riding his ATV around the beautiful cottage forests, and more. I will always remember his quiet appreciation of the fun and joyful times with friends and his beloved family. He was always willing to lend a hand, even when his health declined. My deepest condolences to his dear family, my second family growing up. May he Rest In Peace. Xox

We are sorry for your loss. Our thoughts are with all the family during these difficult times. Thanks for all the memories.

Dear Gillian
I am truly sorry to hear about the passing of your dear father. My heartfelt thoughts are with you during these difficult times. Please accept my deepest condolences for you and your family.

Judy, Gillian, Andrew and family our love and thoughts are with you in this terrible time. We have such fond memories of Roger. He was such a special soul and one of a kind. He always wrote me a sweet message for my birthday and made me feel special, so caring to Maya when she was younger. He will be missed so much 💐

Hector and I are very sorry for your loss, our deepest and sincere condolences to all the family.

Judy, Gillian, Andrew and Family
Wayne and I were devastated to hear the news of Roger’s passing. He was always there to help out no matter the situation. We couldn’t have had a better friend for approximately the last 30 years.. We had a lot of fun together didn’t we! Loved you like a brother and you have left a huge void that is hard to fill if ever. RIP Roger💐💐💐
Cynthia and Wayne

Judy and family my deepest sympathy to you at this difficult time. We will miss Roger at our Prayer Group. He. was a generous guy, who would do anything to help someone who needed it. This is photo of he and Earl, helping me redo my mobile. RIP MY FRIEND. 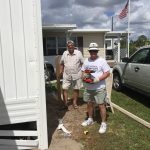 My sincere condolences for the passing of Roger. I always remembered him being a very kind and loving man! You are all in my thoughts and hugs to you all. ❤️

Dear Judy and family my sencere sympathy. Roger will be greatly missed in our little community of Mariners Cove. Great guys like him come far and in between. May he Rest In Peace now. ❤️

Judy. And family. So sorry. Loved you guys so much. So glad I got to know you and Roger. He made our park a better place. Hugs and prayers.

Judy❣️Gillian and Andrew and family you are in my thoughts,love yous. Roger so loved by so many…so sad he is gone…will miss him so much and his voice…so distinguished like him. My deepest sympathy and condolences. May he rest in peace without any earthly pain or concerns only heavenly happiness!! ❤️❣️

An easy way to send Flowers to your loved ones

We’ll guide you with support and empathy.

At Heritage Funeral Complex we like to offer an opportunity for you to ask us any questions that you may have about funerals, funeral planning or a current / past service that we provided. Your questions will remain confidential and we will only contact you by your preferred method.

You may also feel free to contact us directly, in person or by phone, any time of the day.

INFORMATION ABOUT THE COVID-19 & FUNERAL SERVICES

Dear Valued Member of our Community,

We understand that all of the news coverage and concerns regarding the COVID-19 virus can raise a lot of questions regarding funerals. We want you to know that Heritage Funeral Complex is still here to assist you 24-hours a day, 7-days a week. We are taking every precaution to provide you and your loved ones with a safe environment. In order to reduce risks of spread of the Coronavirus and protect our customers, we are taking the necessary hygienic precautions.

We recommend that families and the community take the following preventative actions:

– If you are sick or have been in close contact with someone who has been to a foreign country or has been sick, please stay home.
– Condolences can be sent via our website.
– We highly recommend that the elderly and those with chronic illnesses avoid funerals until the COVID-19 pandemic has passed.
– Avoid hugging, kissing or shaking hands with others.
– If you must attend a funeral, employ “social distancing” and be mindful of those around you.
– Use tissues when you sneeze or cough and throw it away in the trash.

Our intention is to provide you and your loved ones with the funeral services you require, while managing to keep everyone safe.

We invite you to consult the official government websites (Federal, Provincial & Municipal) for information on Covid-19 and what you can do to prevent its spread.

Note that viewings and funeral services may be postponed due to the Coronavirus situation or at the request of the family. We invite you to consult our web site for up-to-date information on whether funerals have been postponed, please see our online obituaries page.

We appreciate your understanding and look forward to serving you and your family.

Probate is the legal process that transfers legal title to the property of the deceased’s estate to their beneficiaries. During the probate process the executor of your will goes to court and identifies all the assets you owned, assesses the ownership of it, and pays all debts and taxes, proves that the will is valid and legal, and distributes the property according to the instructions of the will. Probate can be a lengthy legal process if there are no probate plans in place. Just talk to your lawyer to find out what you can do to avoid probate in your area.

Everyone knows they should have a will, but the vast majority – about 70% of us – don’t. Writing a will is easy and inexpensive, and once it’s done, you can rest easy knowing that your hard-earned money and assets will be distributed as you wish. In addition, if you have children, you can indicate who will take care of them when you die in order to avoid this decision being taken by the courts. Making a will is easy, you just need to be at least 18 years of age and be of sound mind when writing the will. To make a legal will, you must

Although you do not need a notary to make a will, it is recommended that you do so with a lawyer as it will avoid all the legal headaches after your death. Once your will is completed, it is recommended that it be kept in a safe and secure location outside of your home. If you have your will made by a notary, most law firms will keep it for you free of charge. Many people keep their wills in a safe deposit box at a bank, but this is not recommended as the contents could be sealed at the time of death. The executor of your will should be aware of its location.

What needs to be done with bank accounts after death varies by region. In some areas, bank accounts are automatically frozen after a death. To avoid any complications, the bank should be informed immediately, and you should find out the procedures for the release of these funds, and how to set up a new account for funds received after death. It is recommended that the joint account remain open for at least six months to allow you to deposit checks that are made out to the deceased. To remove a name from a joint bank account, banks require a certified copy of the death certificate. If the deceased had a safe deposit box in a bank, the contents can be sealed after death and a certified copy of